A few years ago, having finally figured out what was making that gorgeous drone on some of my favourite recordings, I bought a dulcimer. Now, technically the instrument I own is called an Appalachian dulcimer. Despite the name, I was quite surprised to discover that the instrument's origins lie in the United States, though its antecedents can be traced back to Europe. Moreover, there's a vast tradition of American dulcimer music with which I'm entirely unfamiliar. Why? One, I'm not big on old-timey country and bluegrass, and two, the favourite recordings mentioned earlier all emanate from the UK. So, dear Americans, forgive me for believing the dulcimer was a British instrument used to play British folk music—and for continuing to write and perform broadly within that tradition. (And if you think that's blasphemy, I present one of your own: synth-pop dulcimer diva Cyndi Lauper. Who knew?)

The dulcimer is one of the easiest stringed instruments to play; it's also one of the hardest to find, unless you live in rural Appalachia. I live in a big city with big-city music stores that sell banjos, mandolins and ukuleles galore. But only one had a dulcimer, a Romanian knock-off that a bit of research told me was best avoided. I soon realized that to get what I really wanted (a pickup, 6 1/2 and 13 1/2 frets, and a well-made instrument), a field trip either to Tennessee or a local builder was in order. Fortunately, Hugh Hunter of Midnight Special Instruments was a two-hour bus ride away in the town of Rockwood, and I was all set. (I think he's since moved, and I'm not sure where. Still in Southern Ontario, I believe.)

Here are a few basics to start. Unlike most stringed instruments, the dulcimer is played in your lap. Also unusual: the lowest string is farthest from you. Strings are typically strummed or plucked with a pick, though some players are finger-pickers. In its standard construction—as many variants exist as folks who want customized instruments—the dulcimer has four strings: a bass string, middle string and two melody strings. There are many possible tunings, some of which are listed here. I use DAdd, low to high, primarily because as far as I can tell it's the tuning used in those haunting British folk songs that got me hooked in the first place.

The two melody strings are tuned in unison and are so close together you can't fret them separately anyway, unless you're the Django Reinhardt of the dulcimer. As a result, you need a considerable wingspan in terms of finger movement, because 95% of your melody is being played on that one pair of strings. Fortunately, my stubby bass-player fingers and their extended reach have helped in that regard. (Which is nice for a change; they're a liability on the mandolin and sometimes the guitar, too.)

The dulcimer's frets are arranged such that they create a diatonic scale. This means two things. First, it's nearly impossible to play a wrong note. You'll pretty much get a pleasing tone no matter where you put your fingers. Second, certain notes in the chromatic scale are simply unavailable. I'll use an example to illustrate:

So, if you want to play (let's say) an F on a dulcimer, you need to re-tune. Simple as that. Using a capo won't give you more or different notes, but it does make things quite interesting in other ways. When I bought my dulcimer Hugh had no capos in stock, so I ordered one from a guy in Ohio named Ron Ewing. 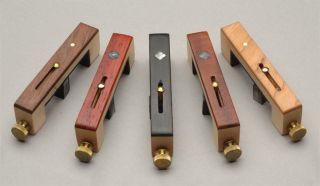 As you can see, these handsome devices would never be mistaken for guitar capos. A dulcimer neck is far thicker than that of a guitar, so a guitar capo wouldn't fit at all.

Once you capo a dulcimer, all bets are off. Because the instrument is diatonic, putting a capo on it changes not only the key but the scale itself. When I first started out, I couldn't figure out how those UK folk-rockers were getting brooding minor keys out of their dulcimers, as mine seemed resolutely stuck in D major. Well, slap a capo on the first fret and presto: you're now in E minor or E-aeolian. If the song you're playing is in C minor (like "Witchwood" below), just keep your capo on and tune down two whole steps. As you might guess, capoing further up the fretboard produces new scales (and modes) every time. I haven't yet figured out what they are, but thankfully Steven K. Smith has.

I'd be remiss if I didn't point you in the direction of those haunting British folk songs, so here goes. Some feature electric dulcimer, which only adds to the fun:

And for your listening pleasure, here's the first song I wrote on dulcimer, "This Magnificent Dare." The dulcimer is double-tracked and tuned down two whole steps to Bb.