Go Forth with New Strength 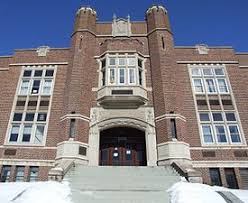 You know, you can go years without giving a thought to your high school. I certainly did until Tuesday, May 7, when the lead item on the morning news was a six-alarm fire at York Memorial Collegiate Institute, a day after its 90th anniversary. For most Torontonians it's a tragedy, but one from which they might feel rather detached: some old high school in the west end caught fire. Sad, but oh, well, right? Well, it's a punch in the gut when it's your old school—even when we're talking almost 40 years ago.

Ironically, just days before I'd joined a Facebook group for YMCI alumni. We had a reunion scheduled for May 25 at the school, and I'd been waffling about going. There's now no school at which to hold a reunion. Yes, the building is still standing, but the roof is gone. The centre of the structure, including its magnificent auditorium replete with stained glass windows, is completely blown out. You can see right through it if you stand at the front doors. (Alternate, unofficial gatherings have been arranged for May 25, including a day-long open stage at the Cadillac Lounge. That's where you'll find me.)

I was surprised at how deeply the fire affected me. My memories of the place, and my high school years in general, are neutral. High school wasn't the best time of my life nor the worst. Yet there I was last Saturday, school sweater on, heading up to Keele and Eglinton on the TTC because I had to see it. As an "active investigation" in fire marshal parlance, the area is fenced off so it was hard to get too close. Around back, I noticed a woman standing at the fence. She turned to me and I said, "Mrs. Henery?"

Now, Mrs. Henery has been retired for 25 years. She taught geography and math, I believe. I never had her as a teacher, but it's amazing how 40 years melted away in that flash of recognition. And there we stood, each fumbling to express an unspeakable sadness. I spent five years of my life there; she, perhaps 20 years of her working life. "You were in Miss Manson's class, weren't you?" she said. "Yes. Grade 11 history." "Well, I'm still in touch with her. I'll say hi to her for you. What was your name again?"

I never thought in a million years I'd write a song about my old high school, but I had to ... just to process the sudden onslaught of strong, unexpected emotions. Simple as that. And soon after I began I realized it wasn't really about me, though it's filtered through my particular lens. It's about York Memo and all of us who studied and worked there, through the many decades. The school motto—something my teenage self would likely have snickered at—was a perfect focal point for what I needed to express. It also gave me the song's title. And with that, I humbly present my demo of "Go Forth with New Strength," for Mustangs everywhere:

Red-and-gold fire trucks, a six-alarm blaze
My best friend Dan had his name on that wall
Murals and stained glass they just couldn't save
Flames tore through what once was the hall
They did all they could do
Now it's come down to me and you to bring it all back

Met Mrs. Henery down by the back fence
Came all this way to salute her old school
Ashes, brick and cinder, it's so hard to make sense
We stood agape as only the helpless can do
"Say hi to Miss Manson"
And I'd pay you a king's ransom to bring it all back

Come on, you red and gold
Weave all the tales you've told
And all the lives you mould
Into a common goal
We want a new rebuild
Let's see that dream fulfilled now 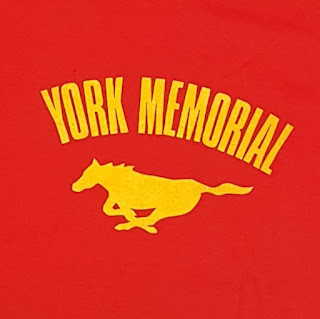