Mastering and Deep Editing, or How to Bake a Cake Through Music

In the course of mixing and mastering my latest creation, a cover of The Flamin' Groovies' "Shake Some Action," I realized anew that the Zoom R24's mastering presets are woeful, and only deep editing will salvage them. (See February's post for a full critique.)

As I noted back in February, mastering a song is kind of like icing a cake. To further the analogy, you want to apply the right icing—e.g., chocolate icing on a chocolate cake, not strawberry-peach-mint—in the right amount, and whatever you do should enhance the cake's inherent good qualities, not fundamentally alter them. The R24's presets, without exception, fail on all three counts.

Of the unit's 20 presets, 18 are so abysmal as to be useless even as starting points for editing. Two are marginal. Continuing with the cake metaphor, the built-in presets give you way too much strawberry-peach-mint icing on what was supposed to be a chocolate cake and they'll change your cake into cornbread. You're left with a monstrosity that sounds nothing like your original mix.

I've tried editing the marginal presets (14 Clarify and 20 Maximizr, for the record). Unfortunately, I'm groping in the dark. The parameters are named such that it's impossible to set EQ and compression the way you would in a DAW. I can adjust things like "Mix High," "Sense Mid," "Xover Lo" and so on, but don't know what exactly it is I'm cutting or boosting. I have only my ears as a guide. Anyway, I've toned down Maximizr so it's not quite so crazy with the level boost and squashing, but still haven't achieved the desired result, which is a subtle enhancement of my mix.

Initial experiments with Clarify have been more promising. In its original form, Clarify sucks up your bass and low mids and adds a harsh, brittle high end, almost like a transistor radio. In other words—icky kiwi-fruit icing, too much of it, and it changes your chocolate cake into shepherd's pie. I've dialled down a few settings and subtly boosted others, and after A/B'ing my untreated mix with the modified preset, I think I'm close to what I've been after all along: a subtle enhancement. In other words, a dash of high-quality chocolate icing on a chocolate cake, bringing out le gâteau's chocolatey goodness.

If you own a Zoom R24 and want to try this out yourself, here's precisely what I did. My changed values are in bold, in brackets; if a value isn't listed, I left it as is.

This edit was then saved as a new preset: 22 V Clear. Further tweaking might be necessary, but now I've got a mastering preset that broadly does what it's supposed to—add a level boost, a little brightness and some subtle compression to my mix. And my chocolate cake is still a chocolate cake!

Well, I've had a month and a half to get acquainted with the Zoom R24, and have two covers completed so far. Recording these has enabled me to appreciate the unit's features, come to terms with its quirks and learn a lot in the process. Once I've done about 12 or so covers, I'll post them as a free mp3 album and you can hear the results for yourselves.

Now, some sources of vexation:

My bottom line? With a modicum of additional equipment and a dash of savvy and patience, you can produce high-quality recordings with the Zoom R24. You'll be the judge when I unveil my "covers" album, but two songs in I'm quite happy with the results. And I haven't yet explored integrating the Zoom with a DAW, specifically the included Cubase LE. I'm about to transition to a new computer and am unsure which one I want to install it on, so I've held off on the download for now. Presumably this will further extend the unit's capabilities once I navigate Cubase's learning curve.

Zooming Towards My Next Album

Over the past two years, I've been saving my loonies and toonies to get my home studio up to scratch and start recording my next album. Linden Tree near the Water was recorded entirely in Audacity on a creaky Dell desktop running Windows XP. That desktop has since died, and my current computer lacks the firepower needed to run a DAW (digital audio workstation). So, I've gone old school and bought a standalone 24-track recorder. Ladies and gentlemen, I present the Zoom R24. 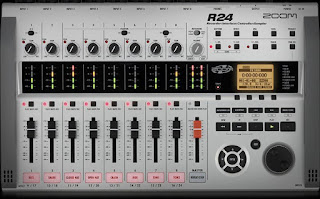 I say "standalone," but really, it's only so if you want it to be. The R24 is also a sampler, drum machine, DAW control surface (a Cubase LE download is included) and computer audio interface. It comes with built-in condenser mics, a metronome and a chromatic tuner. Oh, and it's a powerful effects processor to boot. And did I mention the included USB stick and its 1.5GB of drum loops? That's an incredible array of features packed into a unit that's maybe 15 inches across.

I'd been researching multi-track recorders for well over a year, and I chose the R24 for a few reasons: one, its staggering versatility; two, the number and variety of onboard effects (267, with room for 123 custom patches); and three, I've sampled the Roland TD-11K drums I used for my last project and can play and record this kit on the R24. No other recorder will let me do that save for the Zoom R8, my unit's bare-bones cousin.

The R24's bundle of goodies is, frankly, a steal at $670 Cdn ($500 US). Now, think about that. Especially if, like me, you've been recording at home since the early '80s. My first Tascam 4-track cost well over $800, I believe, and we're talking 1983 dollars. Its recording medium was cassette tape—cutting-edge at the time—and the "effects" section consisted of a few EQ knobs. These days, the quality of recordings you can produce on the cheap is astounding. If your budget is seriously limited, for instance, the R8 retails for $400 Cdn ($300 US) and shares essentially the same architecture as the R24.
I bought my unit a couple of weeks ago but am keeping it under wraps till Christmas Day. It's been a tough year, and I want to cap it off with the ultimate present to myself. In the meantime I've been doing my homework, watching online tutorials, reading the manual and generally getting a leg up before I begin in earnest.
The plan is to record 10 covers to start with. Covers are more fun, and I've chosen an eclectic bunch that should acquaint me with most of the R24's capabilities. And I figure that by the time I've recorded, mixed and mastered those, I'll (hopefully) have made all the mistakes it's possible to make and can apply that learning to my own material.